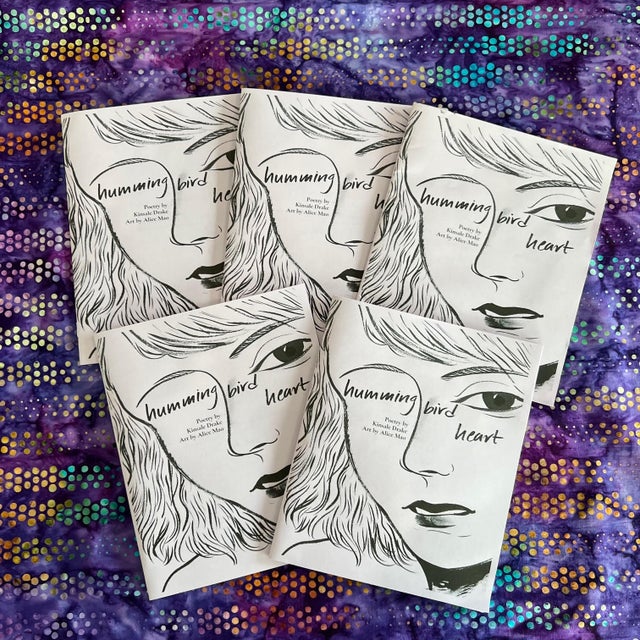 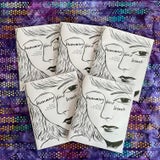 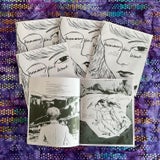 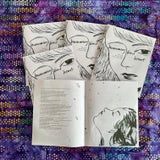 “hummingbird heart” is a zine about inversion of the cishet white, male gaze, alienation, desire, loneliness, queerness, and other “ness”es. created in 2021 by alice and kinsale while on an ill-fated nyc trip that ended with squatting in UNIQLO eating streetmeat, the zine was inspired by alice awkwardly asking kinsale “if she was ... you know...

”she was. they both were. and thus, this zine was born

Kinsale is a Diné poet, performer, and junior at Yale University studying the intersections of cultural (re)vitalization movements, Indigenous poetics, and Indigenous feminisms. She previously served as a 2017-2018 National Student Poet, was named in 2019 as one of Time Magazine’s “34 People Changing How We See the World,” and is the recipient of the J. Edgar Meeker Prize and the YIPAP prize for poetry. Her work has been published or shared by Torrey House Press, the Los Angeles Times, Time Magazine, The Adroit Journal, and more. Usually based on occupied Tongva Lands (Los Angeles) and out of the Southwest, she works with Native youth in storytelling and mental health programming, edits Changing Wxman Collective, and can often be found penning love poems to the high desert. According to Alice, “She once made her boyfriend kiss a rat, which was a lot to process. She showed me pictures. :(”

Alice Mao is a sophomore at Yale University studying art. Her work explores themes of isolation, desire, and alienation. According to Kinsale, her work is “really, really gay.” While she primarily works on illustrations and paintings, she also writes, animates, and designs. She is the recipient of the Richard and Jean Coyne Family Foundation Award, George H. W. Bush Points of Light Award, and a United Nations Sustainable Development Goals Action Solitarity Award Nominee. She is also part of the 100 Changemakers Project hosted by the Bill and Melinda Gates Foundation, and a 2021 Tedx Youth Speaker. In high school, she co-founded Student Art Spaces, a global nonprofit organization amplifying the voices of under-served young artists in professional spaces through service and advocacy. She intends to work as a painter and illustrator in New York City after she graduates, ideally with a dog. She can also be found around campus dressed like a UNIQLO ad. See more of her work on instagram at @alicemaoart or on her website, alice-mao.com.